EDITOR’S NOTE: Starting school in a new country can be tough, but for many of Williamsport’s international students the culture shock is often replaced by a strong sense of community. Follow along with On the PULSE during our week-long series to discover the unique experiences of students who come here from across the globe.

WILLIAMSPORT – Imagine. You’re 18 years old. You don’t know a soul and you’re on your own. Now imagine that you speak a different language and, for you, this is a completely new country.

Feinstein can empathize with her pupils all too well. A native of Singapore, she first came to school in the states over 30 years ago. While Feinstein is happy to report that international student services have evolved since then, she understands some of the challenges, from learning to think in English to adjusting to small-town American culture, remain the same.

“Now we have more students coming from a wider range of countries, and they’re coming younger as well. Some of our students are just 17 years old. This is their first time away from home,” Feinstein says.  “So, I relate to the homesickness. I relate to trying to explain to people the country that I came from. You know, oftentimes, you are met with a lot of assumptions.”

These are assumptions that are not always meant to be unkind, but they can be taken the wrong way by someone who is a bit more sensitive, Feinstein adds. The goal is to be mutually respectful as they work to learn about each other’s countries.

This is where Feinstein and Shanin Dougherty, coordinator of International Programs at Pennsylvania College of Technology, come in. Their main job is to help Williamsport’s international students feel as comfortable as possible. With 55 international students at Lycoming and 14 at Penn College, both advisers are always busy in their quest to set the young people up for academic and personal success. Dougherty describes her role as the students’ “point person.”

“So, I’m the person that they can come to if they have questions about anything that’s going on: adjusting to the classroom, because it’s a different environment — adjusting to the community,” Dougherty says. “I let them know about all the awesome things that we have here in Williamsport, what we have going on downtown. Also, if they’re into outdoor activities, you know, this is the place for that. So we try to connect them with different things.”

One of the resources that the students especially enjoy is Thrive International, a program specifically for Williamsport’s international residents — not just students — based in City Alliance Church on Elmira Street.

Thrive focuses on increasing language proficiency, cultural competence, immigration legal assistance, and opportunities to integrate with and serve the community. Students from Lycoming and Penn College participate in the Language Café, a monthly event that features meals from different countries.

Dougherty is especially grateful to Thrive for “easing that (initial) transition and any homesickness that might be there.” And this is just one way to get involved with the Williamsport community — something, Feinstein says, these international students really strive to do.

“I find my students always asking me about opportunities,” she says. “ ‘How can we volunteer?’ They are very community minded, because I think that is how they have functioned in their home countries . . . I hope the community will think of my students as well when they have a need for some extra hands, or when they want some participation from a diverse group of young people. I know 55 really eager students,” she adds, laughing.

Feinstein and Dougherty hope their students will be embraced by the Williamsport community. They stress the need for the community to offer the same love and respect each of them would strive to receive.

She encourages the other students to reach out to those from across the globe and invite them into their dorms, friend groups and social outings.

“You have to be brave, you have to put your hand out and shake the hand of the person next to you and say, ‘Hi, this is who I am.’ ”

“I think it’s just being welcoming and interested in other people’s stories,” Dougherty adds. “That’s just a good way to live your life no matter where you are. Because stories are what connect us.” 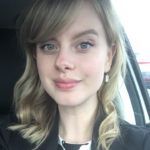 Allison Lax is a creative writing major at Lycoming College. She is a Williamsport native and a writing tutor at the college Writing Center.

Allison Lax is a creative writing major at Lycoming College. She is a Williamsport native and a writing tutor at the college Writing Center.

‘I feel like I grew up here’: Taiwanese student would be sad to leave Williamsport

‘You didn’t give up’: Saudi student is proud of her journey at Penn College

‘I feel like I grew up here’: Taiwanese student would be sad to leave Williamsport

Dive into downtown as area events fill the streets