The progression of technology is mind-boggling. In January 2007, Apple kicked off a cellular phone service boom when it introduced its first iPhone. Only about 3 percent of Americans over 13 years old owned a smartphone. By December 2016 — nearly 10 years later, that figure had leapt to 81 percent, according to the 2018 comprehensive plan for Lycoming County.

Yet in many parts of this semi-rural county, cellular coverage and broadband internet service are spotty at best or even nonexistent. It’s an issue the county planning office wants to correct.

“We’ve known forever that the rural areas of our county have very poor internet connection, or broadband,” said Kurt Hausammann Jr., planning director for Lycoming County’s Department of Planning and Development. “And most of the rural areas of the county can’t even get a connection that qualifies as broadband because it is too slow. The state wants you to have 25 megabits per second, which qualifies as broadband. But even a mile outside Hughesville where I live, I get 4 megabits. Basically, the areas of our county that have good broadband are our boroughs and the city.”

There will be a public meeting at 2 p.m. Wednesday, July 10, in the first floor commissioner’s room at the Executive Plaza, 330 Pine St. The planning commission would like to hear from the public about internet issues, service providers and the lack of service providers. A survey form will be available at the meeting as well as on the internet, at libraries in the county and at the McHenry Township Community Center in Cammal. 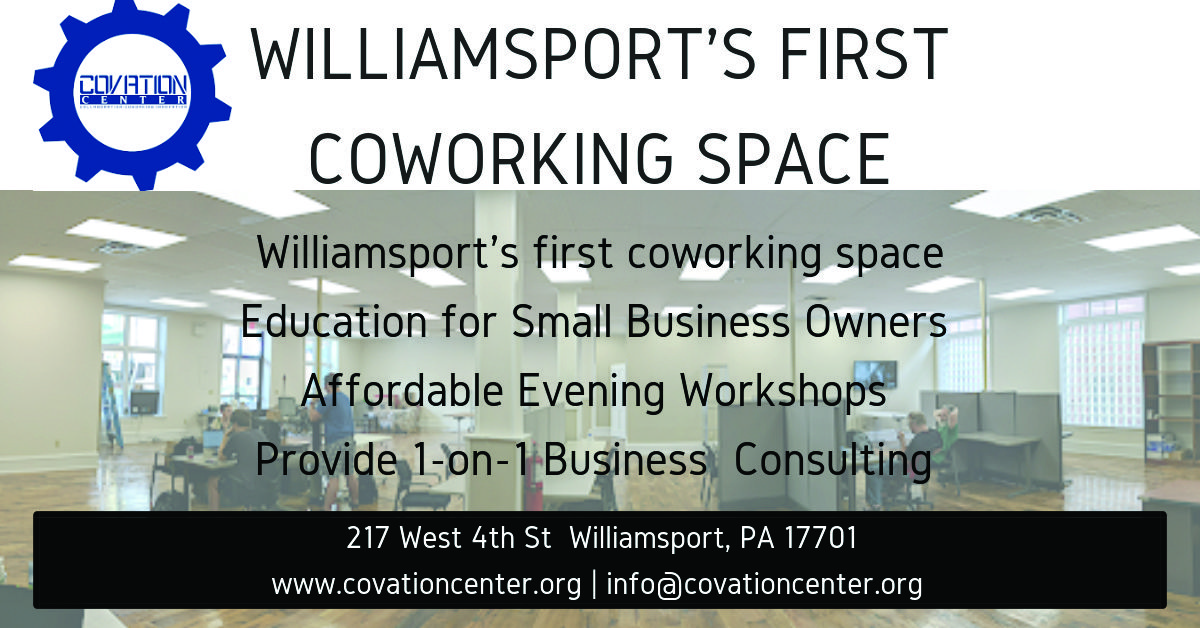 Lycoming County growth areas contain public sewer, public water, a good highway system and good internet and communication. The areas from Jersey Shore to Montgomery along the river have good infrastructure in place. But the outside areas such as Cogan Station, Wolf Township and the Pine Creek Valley have a poor internet infrastructure, according to Hausammann.

“It is of interest to our department because the infrastructure of a community is our definition of community development,” said Fran McJunkin, deputy director of planning. “And internet is just as much infrastructure as roads and pipes.”

Potential home buyers don’t ask first about the heating system or the roof anymore, Hausammann said. They ask, “What is the broadband service like here? Can I get cable, modem, DSL or, god-forbid, is it still dial-up?”

Running a business from home is difficult, but without good internet it’s even harder, said Dr. Steve Brady, owner of the Covation Center, who lives near Rose Valley Lake and balances his work between a seperate home-run business and the Covation Center in Williamsport.

“We have a seasonal member who comes in (to the center) to work when his family is at their cabin,” Brady said. “His cabin doesn’t have internet, so to work he can come to the center and make his conference calls and get his work done.”

Brady has been an advocate for better rural internet access for years, saying that a rural environment provides families with natural beauty to raise a family in.

Stephanie Desaulniers used to live just five minutes from the Lycoming Mall in Upper Fairfield Township. She moved to Lake Road near Rose Valley Lake in Gamble Township specifically because she had more internet options there.

Both Desaulniers and Brady work from home and use River Valley Internet.

“To be able to work from home gives you the opportunity to work in an area you would like to live in and without broadband people don’t have the ability to live where they want to be,” Brady said.

The rolling hills and heavy foliage for which Pennsylvania is known limit rural locations’ access to internet service.

Rather than receive the internet through cable or fiber as do most urban dwellers, rural residents must rely on phone line connections through Verizon or microwave technology from towers situated around the region.

The towers are mounted with microwave equipment that sends a signal to an antenna situated on the individual’s house. Service like this is predominantly provided by local internet companies, such as River Valley Internet, based in Williamsport.

The rural internet dilemma is a primary focus for River Valley Internet, according to Matt Hoppes, CEO and owner. “It’s incredibly important and why the company was founded.”

But providing a wireless service through a tower system comes with its own set of difficulties. An abnormally wet summer last year delayed tower-build expansions into rural areas. Hoppes added that building new towers and installing new equipment throughout the region costs money, something that takes time to accrue.

But “money, in any reasonable quantity, can’t move a mountain,” Hoppes said. The terrain in the area does provide a challenge, whether building wireless or fiber internet services.

The planning department hopes Wednesday’s public meeting will help create a plan for future broadband solutions in the county.

“In our comprehensive plan, we try to lay out a vision for the future,” McJunkin said. “And we have heard very clearly that the vision is hampered by a lack of internet.”

The upcoming study will first identify problem areas where there is not adequate service for broadband or internet and, second, identify a solution so the county, municipalities, organizations and private companies can start to provide adequate internet and broadband, Hausammann explained.

“It will identify areas that have adequate service now and then it won’t focus on them,” Hausammann said. “With a county that is our size and how rural in nature it is, we anticipate that it won’t be a one-size-fits-all solution. There will probably be different solutions for different areas of the county.”

The study is coordinated by the planning commission and Susquehanna Economic Development Administration Council of Governments, (SEDA COG).

“The Jersey Shore Area School District said access to the internet is a No. 1 issue,” McJunkin explained. “The access is so bad that the kids can’t do their homework.”

Dr. Jill Wenrich, Jersey Shore superintendent, has been trying to do her part in providing awareness on a lack of broadband in the area. There is a link on the district website that asks individuals to “click here to help the Center for Rural Pennsylvania to determine broadband coverage in the state.”

“There are students who live in remote areas of the district that do not have internet access — or (have) a low-functioning internet — to utilize the technology the district provides for them,” Wenrich said.

Former Jersey Shore teacher Ellie Hubbard said even if some students did have the connectivity, they didn’t have it consistently because of the landscape of the region. “We just don’t have the infrastructure yet,” Hubbard said. “There’s literally a mountain in the way. Technology has become such a push not only in education but in business also. There are some businesses that won’t give paper checks anymore; it’s all direct deposit and online banking. It’s more and more of a trend. Even if we don’t want to be tied into technology, so much of our lives are integrated into it.”

Hausammann expects the study will showcase a host of options as solutions. Mini cells, or smaller towers that act as a mesh network and strengthen the bigger towers, will possibly be used primarily for cellular service. Additional towers may be added as well as putting repeaters on existing towers. There may be areas of the county that will need satellite service even though it’s not that reliable in poor weather, Hausammann said.

Cellular service is another issue. Most people browse the internet, check emails and communicate by text on their smartphones or tablets rather than computers at home.

“You can use internet over cellular to perform work on your phone if you have a good enough signal,” Hausammann said. “Cellular service providers have service area maps but they are not at all accurate. They show big, broad coverage but there are holes in it all over.”

The commission recognizes that the lack of consistent cellular service is a real drawback for the area. Cellular works on direct line of sight with a tower. Austin Daily, community and economic development planner, said, “They have an expected radius of range on the towers, but it doesn’t take into account the terrain.”

“People who come here from outside the area are always amazed by the lack of service,” McJunkin said.